where are they now and other stuff

Have you seen this car? Buckler Sports Car MBW 100

As some of you may know, my penchant for British cars stretches well beyond MG and Rover and encompasses most British car and vehicle manufacturers. One such manufacturer is Buckler, a truly pioneering car manufacturer which operated in Berkshire from 1947 to 1965.

Along with only a small number of other (mainly British) manufacturers, Buckler pioneered the concept of kit cars – albeit factory built vehicles were also available; a Buckler was one of the first cars anywhere in Europe to be fitted with a (then revolutionary) GRP body; and the company produced a backbone chassis car before Lotus – contrary to what many think, Mr. Chapman did not pioneer the backbone chassis, Derek Buckler did. The company also produced a range of aftermarket accessories for other more mundane cars, together with a highly successful range of Go Karts.

Buckler engines came from a variety of sources including Coventry Climax, Ford – together with other MGR predecessor companies including MG, Triumph and BMC. A lot more information can be found on the Buckler Cars website at http://www.bucklercars.com

One of the aims of the Register is to track down surviving Bucklers – of which there are still quite a few around. But one car which at some point seems to have gone missing in action, was registered MBW 100. Until recently, nobody had heard anything of the car for decades – but it appears that the car was in the Coventry area as recently as last Spring and may still be there. A picture of this beauty can be found below, taken at a guess sometime in the early 60s.

The copyright in this photograph belongs to Mr. Malcolm Buckler

Now unfortunately, this car doesn’t appear to look quite as good today… over recent years seems to have been sporting a quite distinctive livery, consisting of a Pakistani flag on the bonnet and Islamic scripting on the side of the car. It also now sports a roll over hoop. And the original engine – which may have been MG in origin, as there is an MG badge on the steering wheel – seems to have been replaced with a Vauxhall Astra GTE engine at some point since the last 80s.

My understanding is that the car was last seen in the Hillfields or Foley Road area of Coventry in Spring 2007 and I wondered if anyone recognised the car either recently or at any point since it was built. If so, please e-mail me, PM me or alternatively you can contact the Buckler Club’s Simon Ambrose via the Buckler website at http://www.bucklercars.com 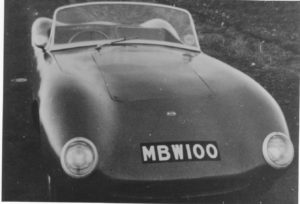 Many thanks to Peter Ramella for this snippet below… Does anyone know where Malcolm is?

I don’t have any pictures, however, I worked with a chap called Malcolm Best in the late sixties at Arcott Engineering a Armstrong Siddley specialist in Chelsea, he was trying to get into motor racing and he bought a Buckler sports car from someone locally, it had a side valve 1172 engine with a aquaplane alloy head no shock absorbers sleek streamlined body in red I think the Woodhead people came down to sort the coil over shocks out for him as we didn’t have a clue, it had a beam axle at the front which I recall, may have been turned into independent front suspension. He bought the car from somebody in Chelsea and he kept it in Chelsea, I left the job and I lost touch with him shortly after. It would be nice to know what happened to the car as it was very futuristic for it’s time and no one seemed to know any thing about the marque ?

The best way to describe the body, it looked very much like a Lotus X1. I can’t remember the material the body was made of, although, fibreglass rings a bell. He bought the car from someone he met in a pub in Chelsea, Malcolm loved the pub life, I believe he also knew Chris Amon from some pub or other. I hope he did manage to race the car as he was a gifted driver, he was always very keen to get hold of any exotic sports car that came in either for servicing or MOT.

I remember a Ferrari 250 LM coming for in for MOT, I think it was something to do with Richard Attwood, Malcolm was beside himself with glee when he managed to wangle bringing it from reception to the workshop. All this happened at Arcott Engineering off Fulham Palace road, behind a famous Italian restaurant of the time called the Meridianna. I know when he left Arcotts he got a garage organised just off the Kings road where he worked on the car , after that I lost touch with him, and I didn’t ever come across him or the car while I was racing in single seater’s in the early seventies.

I hope this jogs a few memories, you might yet unearth the mystery,
Regards 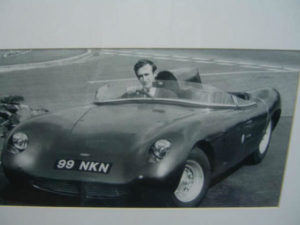 Norman Norrington in his Buckler in c1965
Photo of 99 NKN with me driving it circa 1965. Sold it in 1966 but
can’t remember to whom. It was bright blue with BRDC stickers on the wings
suggesting it had been campaigned. No Hood and needed a blanket round the
legs to stop the heat from the bulkhead!!
I purchased and sold it in the Colchester area. As far as I can recall it had a Ford E93A
side valve engine with an Aquaplane head, double valve springs and went like
stink and was bloody hot in the cockpit. I never raced it, but was always
bemused that I could take it out in the pouring rain and never get wet –
never did understand that, must have had superb aerodynamics over the
cockpit…..ah those were the days, petrol 2/6 a gallon, no windscreen
wipers. Since then have owned a Lambo Espada, Ferrari, XKR, RR (3), Austin
A40 Sports, Jensen Intercepter (3) plus about two dozen other minor and
major exotics, sadly in my dotage now drive a Range Rover……but none made
me smile as broadly as driving 99NKN.
Norman Norrington 2006.
Where is she now?

Well believe it or not. I received some correspondence from Canada

My father who was born in Essex England in 1945 had what he called a Ford Buckler Special.  He does not have any picture of it, only memories.  He described it to me as a very low (didn’t use the doors to get in), rounded body with a hump like a “D” type.  His father bought the car for him around the mid sixties for 100 pounds.  I would love to find a pic of this or similar car.  If you can be of any help please e-mail me back.

He thought the windshield was straight across ( but may be mistaken). It had 13” wheels in the front and 15” rears. The motor was a Ford side valve engine and there were no proper seats, you sat on foam cushions that were recessed into the floor.

Wow, as soon as I mentioned the name Norm Norrington my father said that’s who they bought it from.  My grandfathers name was Robert Osborn from Brightlingsea he passed away 15 years ago.  My father had the car from 66 to 68 and what happened was the brakes failed one day and he rear ended another car.  The car was dismantled and they tried to repair the front end but apparently was never the same.  He eventually sold it off but can not remember to whom.