A Short History of The Buckler Register

by
Stan Hibberd and Peter Silverthorne.

The first part of this “history” took us to the point where Malcolm and I were in touch by telephone. Our phone conversations and correspondence then became a very regular feature, many of our early chats centred on whether there was enough interest in Buckler cars, or enough cars still in use to make the creation of a Buckler Register worth while. We evidently thought there would be, and in December 1971 Malcolm contacted the 750MC who printed “a nice appeal” for Buckler enthusiasts owners to get in touch, in their December Newsletter, this may have generated some further interest because on the 8th of February 1972 Malcolm wrote to me “well I can now say that the Register definitely exists as I now have another two keen members as a result of a very small advert in Motorsport this month” he then wrote ” if you buy Hot Car in April you should see an article about the Register” As can be seen from this, once started we soon had some momentum, this was helped by the publication by Malcolm of his first Buckler Bulletin in March/April 1972. 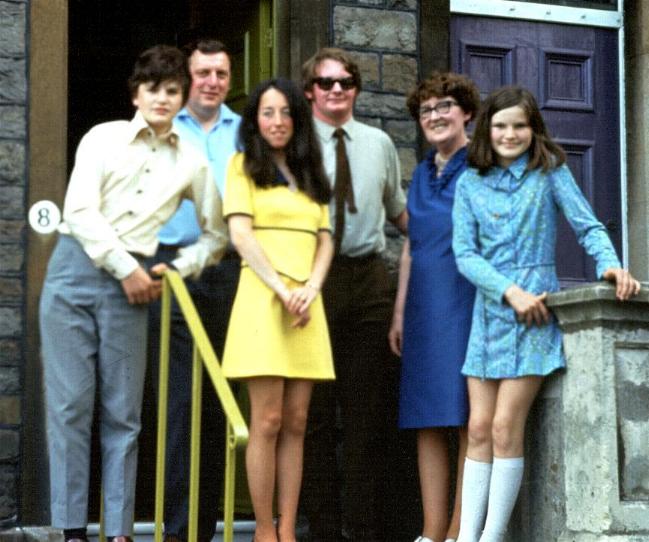 The first ever Register meeting was held at Bristol on the 23rd July 1972, at Mollie Buckler’s home and then at the Coronation Tap (a cider only pub) in Redland Bristol, no surprise to report that my memories of this meeting are a little vague, I have seen it reported that I was there in NAC 344 and that Brian Malin was there in BLY 618, also I have seen reports that Bruce Sutcliffe was present, as I recall there were no Buckler cars at this meeting and certainly it was well before we knew Bruce, about all that I can accurately remember was the pub and the cider and meeting Malcolm and Carole and Mollie, and Keith and Simon I think, also there was Duggie Hyde who then owned a Mark V Buckler later sold to Max De Redder who I believe has very recently sold this car again after 30 odd years.

On the 23rd of June 1974 Malcolm staged the second meeting of the Register, this was centred, on the Tally Ho Inn at Eversley, this meeting was announced in Motorsport Magazine, this led to some frenzied ‘phone calls from New Zealand by Bruce Sutcliffe to the Tally Ho pub, they in turn passed on the numerous messages to Malcolm and begged him to ring Bruce to stop the flow of calls! Malcolm eventually managed to contact Bruce by ‘phone (not to be done lightly in those days-it costs) from my then house in Cannon Lane Maidenhead, before we left for Eversley, so was born the Register/New Zealand connection.

The event saw two Bucklers present Brian Malin’s Mark V BLY 618 and my own Mark VI NAC 344, a pleasant view and chat session in the pub car park, I think I remember Mark Cook being there, was followed by a very well attended sit down lunch in the pub lounge. Then came a treasure hunt around the leafy Berkshire lanes, which in true MCC style produced a deep water splash to test our ignition systems. This meeting was a leap forward in Buckler matters with the imminent New Zealand break through uppermost in everyone’s mind.

The 15th December 1974 featured a meeting for Register members in the West Country; it was organised by Simon Ambrose at the Ambrose family’s home at Bristol. (I think Julia and Keith had more to do with the organising !!! ed)

In June 1975 Stan and Mike Hibberd attended the TT races at the Isle of Man, while there they met Bruce Sutcliffe and his wife, over from NZ and staying with Malcolm and Carole at Fairy Oak, after the TT races everyone moved over to England, the Sutcliffes and the Bucklers to Axminster where they prepared Malcolm’s recently acquired Backbone Buckler for the meeting held at the Crown Hotel, Winsford in Somerset, this was on the 22nd of June 1975, this was in fact the meeting attended by Bruce Sutcliffe, I was present with Henry Allen and my DD2 rolling chassis 5 KBH on a trailer, Brian Malin had his Ashley DD2 there also and the Bob Halls DD2 was running about giving test drives to members, Malcolm’s BB was resplendent in a new coat of light blue paint applied by Keith, Malcolm and Bruce and was undoubtedly the star exhibit, I can remember tea in the village Hall but not much more I’m afraid.

Rugby was the venue for the Register meeting on the 20th June 1976 the first of many meetings to be held at the Rugby Autocar premises; this venue was secured for us by Ken Malin and served us well.

Buckler Bulletin No 22 of October 1976, Malcolm proposes a proper Committee be formed and asks members to offer themselves to serve on this when formed, Stan Hibberd offered to become the first Register Secretary.

The first Committee Meeting was held at Woodcote Cannon Lane Maidenhead on the 16th of January 1977.

Our Register Meeting was held at Rugby again, at the Rugby Autocar site on 22nd May 1977, this featured some mild grass trials sections and a gymkhana type of event, the organisers had to discourage some members who wanted to stage a Buckler sprint on the site roads, some difficulties about insurance and RAC affiliation !

The National Classic and Collectors Car Show was staged at Alexandra Palace on the 8th to the 10th of July 1977, this was another important milestone for the Register, two cars, the Bob Bennet Mark VI and Malcolm’s Backbone prototype were exhibited on the Buckler stand, which was right next to the main stage in the exhibition hall. Our luck was in at this show, Malcolm was in the right place at the right time, so the Daily Mail printed a full-page article about Bucklers generally and the Backbone in particular, brilliant publicity for all things Buckler, and at our first major show. This was 1 believe the first attempt by anyone to organise a prestige Classic car event on this scale, in my opinion it remains the best of it’s kind although it has been widely copied ever since, none of the imitators has captured the magic that this show introduced, we are still friendly with some of the people we met there in the 1970s, Pat from the Allard Owners Club, Jem Marsh etc etc, Bette Hill was there to open the show, what an event, they are mainly Autojumbles nowadays with a show tacked on to bring in the punters. A lot of Buckler members attended and our stand was a real credit to the Register.

The second Committee meeting took place at Mike and Sheila Furse’s home at Chartridge Lane Chesham on the 30th October 1977, we still have the agenda and copies of the reports discussed at this meeting on file, but no minutes of the meeting.

Our usual Rugby meeting took place on the 14th of May 1978, this was to be the last in that series of meetings at the venue which had served us well, it was a memorable meeting, well attended, with the debut at modern events of that most important of Bucklers the works prototype 90 MOR 456, Peter Silverthorne and I had an interesting trip to Rugby with a slightly overheating 90 prototype and NAC 344 alternating on the trailer, the event was perhaps our best of it’s kind, everyone was taking turns to drive the Bucklers present on the tests and attempt the Trials sections laid out on the Spoil Bank.

Our second show at Alexandra Palace was from the 15th to the 17th of September 1978, our stand, not as well positioned this time saw four Buckler exhibits, the prototype 90 racer MOR 456, Bob Bennett’s Mark VI, Brian Malin’s “immaculate Mark V chassis” and my own DD2 rolling chassis 5 KBH, again a lot of interest, a lot of visitors and lots of friendly faces from the previous year, shortly afterward Ally Pally was gutted by fire and 1 think that was the end of that particular show venue for some years.

In issue No 34 of the Bulletin in July 1979, Malcolm was asking if anyone was willing to take on the publication of the Newsletter.

The Register made it’s debut at the Knowl Hill Steam Fayre, we were well received, and this event and subsequent ones attended there proved very productive in finding Buckler people, ex employees, owners, cars, the lot, a very good video was made at the show, this captures the atmosphere very well, it was so popular that we took part in this event for ten years – happy times.

Buckler Bulletin No 35 of November 1979 was to be the last one produced by Malcolm Buckler, this concluded a very important solo effort by Malcolm, his seven years hard graft as Bulletin publisher and events organiser, had played a major role in the growth of the Buckler Register, from some early chit chat on the phone to a strong, exclusive club catering for those owners, former owners, race drivers of Buckler cars, it also rekindled a lot of interest amongst former Buckler employees all of whom had fond memories of the Company and it’s cars.

Issue No 1 of the Buckler Register Newsletter was published in July 1980, this Newsletter a joint co-promotion of Peter Silverthorne and John Orpin aided and abetted by Stan Hibberd, was to continue for 18 years, being involved over that time, on Newsletter publication, organising shows and running the Register, gave the three of us some idea of the efforts Malcolm must have put in over his long stint. The new Newsletter was a success and the Register grew, cars were turning up at the rate of two or three a year, our understanding of Derek Bucklers achievements as driver, car designer, car builder increased steadily and is generally more widely acknowledged than ever before. If you read through the Newsletters from 1980 to 1998 you will see the history of Bucklers emerge as it was researched this continues in Bucklering (our present Newsletter) published from 1998 to date by Ken Green. Now as always the Registers health and effectiveness can be gauged by the quality of its publications, looking back to 1972 has been a pleasant chore, long may it all continue.