Buckler Sports Racing Cars.
4 seaters and some singles too!

In 1947 Derek Buckler designed his own chassis to take the engine and running gear from his Ford 1172cc sidevalve E93a.
He won over 200 awards in this car, competing in trials, hillclimbs, circuit racing, sprints and even won an economy rally achieving just under 100mpg. 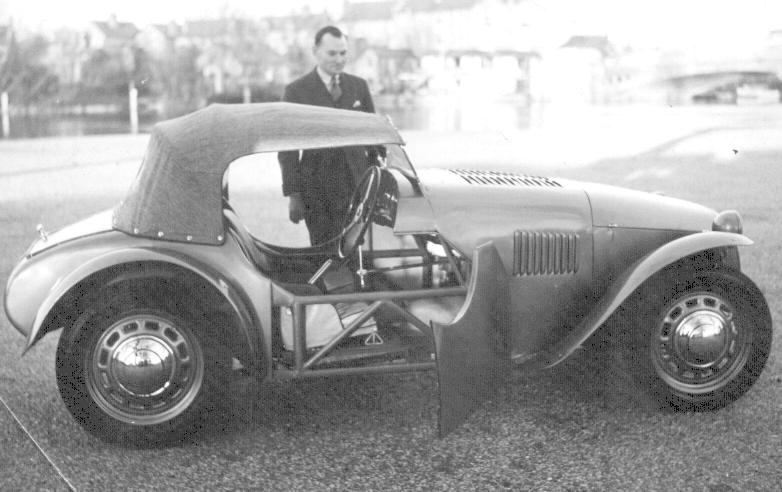 The success of this car naturally demanded a replica. This was the first true spaceframe car to be offered for sale anywhere in the world. Buckler pioneered the ‘kit car’ to avoid the crippling purchase tax. More cars soon followed. ERD96 appeared left hand drive in photographs, using reversed negatives, to fool the tax man into believing the car was destined for export! odd that this car now lives in France. ed.

Many chassis were tailored to suit customers requests. Engines fitted came from Coventry Climax, Ford, MG, Triumph, BMC, Daimler, Jaguar and many more, even a Lincoln V12 was built.
Early bodies were of aluminium, a Buckler Special was one of the first cars in Europe to be fitted with a fibreglass body. Buckler’s also designed very successful Karts and were famous for their tuning accessories from 1172 to full formula Junior screamers and anything in-between !
Buckler’s also manufactured close ratio gear sets that were fitted to most early Lotus’, TVR’s and many Ford Specials of the 1950’s
Peter Hilton became managing director in the mid 50s and continued running the company after Buckler was told to rest by his doctor. Derek’s last car design was the first true Backbone space frame.
Buckler Cars Ltd was first advertised for sale in ’62 and eventually sold to Mike Luff and Frank Fletcher who continued to build cars and Karts until c1965.
Derek Buckler died in 1964.

Below are just a few….. click on the image for a slide show