Midas Touch was driven by Rob Skinner and was powered by a Jaguar lump. The body is AKS.

Many Thanks to the brilliant Acceleration Archives..click here  still working on this…more to follow! 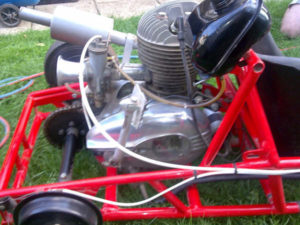 K.R.E. Prince was entered for this meeting in a Buckler/Greeves. Who knows any more?

We have had a letter from Kel Prince! Thank you Kel.

Hello there, I am the KRE Prince who drove in the Drag Festival at Blackbush, by invitation!
I think they were tickled by the cheek of it.
Event was UK versus US-the Americans were and perhaps still are the quarter mile kings.
I was initially rejected by a jobsworth of a scrutineer on the ground that the Buckler was not a dragster-it couldn’t be because it hadn’t got a 1/4 inch steel plate round the clutch.
The front engined dragsters of the day did have as the drivers legs straddled the clutch which often disintegrated on take off.
I appealed to the chief steward who, to the chagrin of the scrutineer, allowed me to compete.
The event was a knockout and I drew the 4wd formula 2(?)Ferguson driven by that years hill climb champion (his name escapes me). At half distance I was ahead and preparing to wave victoriously to the crowd when he roared by reaching about 180mph(?) at the end of the quarter to my 90ish.I’ve no records of the event and so my memories are there to be challenged.

I also raced the Buckler in kart events but the reason for the sprinting was that I aspired to breaking the world 250cc kilometre and mile standing start record which were so old they were there for the taking.
Trouble was that the Greeves was a road racing engine and had a close ratio box with a high first that destroyed clutches at every start.
Bert Greeves promised me a lower bottom gear but such was their small production capacity that it turned up over a year later and by then I’d turned to other things-I still have that bottom gear!.

Sorry to have gone on so but I do get carried away with all these old memories.

Interestingly, Kel was racing against another Buckler owner, Peter Westbury in the Ferguson and also Major Paddy Gold who had an interest in the Buckler company.

Thanks to Pete Huggins

This is not Pete’s. Who ran this?

Mistral Drag Racer. Is this a Buckler? what engine? anyone know? please contact us here